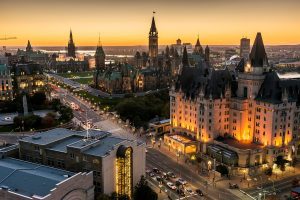 Many people when asked will say that the capital city of Canada is Toronto or Montreal. Ottawa, a city with a population of almost one million inhabitants, is not well known outside of Canada.  The city is known for its charming brick architecture and some attractive buildings characteristic of its status as the capital of the country.  Ottawa is well connected with highways and lies between Toronto and Montreal – making a small detour well worth it.  Apply now for your Canada eTA authorization in order to visit Canada and enjoy it’s vibrant cities.

Ottawa was chosen as capital of the Province of Canada by Queen Victoria in 1857.  The primary reason for being chosen as capital is that it had a relatively isolated location protected by thick forests and this was seen as good defense in case the United States invaded.  Another reason is that it was in the middle of the major cities of Toronto, Montreal and Quebec City.  Subsequent construction of the capital began and a number of attractive buildings including Parliament Hill were built in the late 1800s.  In 1950 Prime Minister Mackenzie King hired French architect Jacques Greber with the task to beautify the city.  Some of the initiatives undertaken by Greber include the National Capital Greenbelt, the Parkway and the Queensway highway system.

The result is a charming city with a very attractive urban core.  Some of the top attractions in the city include the Byward Market  - Ottawa’s version of SoHo with its many cafés, restaurants, bars, open air market and art galleries.  Other highlights in the city include Parliament Hill – the heart of the Canadian government and a very attractive site.  In Parliament Hill you can find the Senate building, the Common building and the Library of Parliament.  All three buildings were built in the Gothic style and are very attractive and emblematic of the city.  There are numerous statues of Canadian historical figures as well British monarchs including Queen Victoria and Queen Elizabeth.  Another major attraction in the city is the National Gallery of Canada.  Housed in a glass and granite building with an interesting architecture, the National Gallery is one of Canada’s premier galleries and includes works by Braque, Cezanne, Dali, Klimt, Matisse, Monet, Picasso, Jackson Pollock, Rembrandt, Rodin, Rubens, Van Gogh, Andy Warhol as well as major Canadian painters. 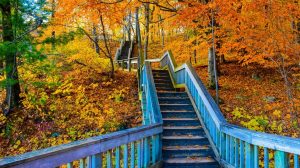 Another major highlight of a visit to Ottawa is the beautiful nature and surroundings the city offers.  Consistently ranked as one of the city’s with the best quality of life in the world and one of the world’s cleanest cities, Ottawa has a very placid green belt and attractive river that are great for walking, jogging, cycling and rowing.  Gatineau Park is a major attraction that is located only 15 minutes from downtown Ottawa but feels like it’s worlds apart.  The park is massive at over 350 square kilometers and contains 165 km of hiking trails and 90 km for mountain biking.  There are also beaches located in 3 lakes found in the park.

Ottawa is a city that will not disappoint the first time visitor.  With its attractive architecture, trendy neighborhoods, cultural offerings and its pristine nature, there is something in this city for everyone.  If you are traveling by car from Toronto to Montreal or vice versa, it is highly recommended that you take a small detour and visit this wonderful city and capital of Canada.  Remember that starting March 15 it will mandatory for citizens of all visa exempt countries to apply for an Electronic Travel Authorization (eTA) before traveling to Canada.  Go ahead and apply now for your Canada eTA so you don’t forget when it become mandatory.