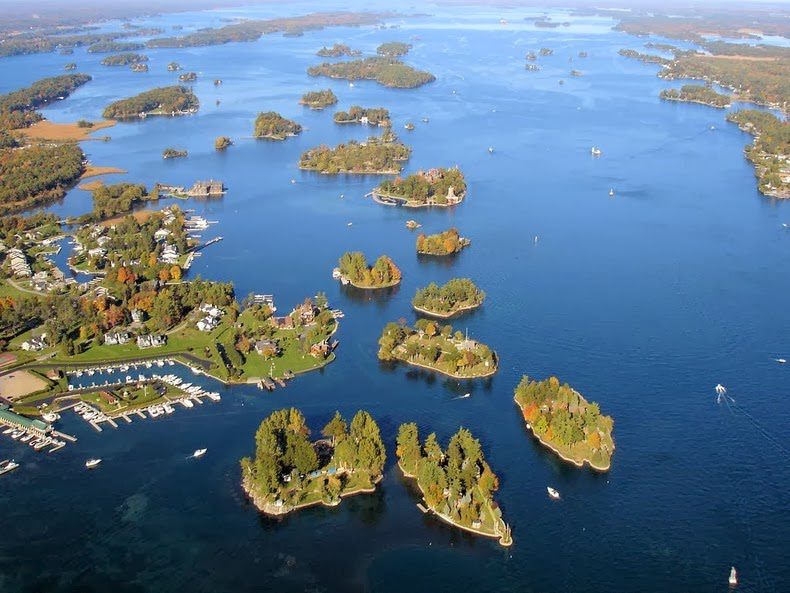 The Thousand Islands, is an archipelago which serves as a border between the United States and Canada, more specifically between New York and Ontario. They are located along the course of the San Lorenzo River and Lake Ontario.

Some of the more than 1,800 islands that make up the archipelago belong to the United States and the others belong to Canada. They vary in length, with the smallest one being big enough for a house or a tree. Many of them are exclusive private islands owned by millionaires. For this reason, it is a very popular destination for people who want to live there or to rent luxury cabins in the summer.

Why is their location so important?

Historically, the Thousand Islands have been point of conflict on each side of the border. In the 18th century, the Islands were a strategic military area for both the United States and the British colony of Canada. This story is still apparent in the streets of the capital, Kingston. Nowadays, it is a place of retreat and privacy of the rich and famous.

Which are the main islands and cities?

This is the biggest island. It is the perfect place for those who prefer the peace and tranquillity of Lake Ontario to go for the summer holidays.

This island is next to Wolfe Island and they both belong to the same municipality of the Frontenac Islands. Howe Island is located to the east of the San Lorenzo River. Its permanent population has decreased over the years to give way to passing visitors. It can be reached easily by ferry.

This small island is located very close to Kingston. All its land is used for farming. It has one of the oldest lighthouses on the American continent.

Kingston is the capital of the Thousand Islands archipelago. Known as the Limestone City due to the material used to build its old buildings, Kingston is located on the north coast of Lake Ontario. The city’s historical wealth is evident in its old buildings and churches, and some of its fortifications, such as Rideau Canal, have been named as National Historical Sites in Canada.

Moreover, the city serves as a port for the ferries and boats arriving from the other islands. Kingston is known for being a cultural and artistic capital and acts as the base for many jazz and blues music festivals. The festivals include Artfest, the Kingston Writersfest and the Limestone City Blues Festival.

This small town is known for its private ports and cabins. Its name is aboriginal and means “town between two rivers”, because it is close to both the San Lorenzo River and the Gananoque River.

What are the main tourist attractions?

Boldt Castle: its impressive structure completely occupies Heart Island. It was built by a magnate for his wife. All visitors pay an entrance fee which goes towards the conservation of the castle.

Thousand Islands National Park is one of the oldest in the area. It is perfect for camping, walking and family events.

The Thousand Islands Land Trust creeks is an area dedicated to the conservation of nature and the indigenous species. It has trails and pathways for visitors and runs annual programmes for children, adults and youths to promote recreational activities.

Singler Castle: this castle was recently restored for tourists. The mystery surrounding it only increases with the discovery of secret passages and hidden wine cellars.

How can I get around?

Private boats are not the only way to sail around the islands. In the cities along the lake and Riverside, cars are the main method of transport. Lots of ferries and tour boats go to the islands from cities such as Kingston, Clayton and Alexandra Bay.

If you are interested in travelling to this destination, please remember to obtain your electronic travel permit beforehand, i.e. ETA Visa or ETA Canada.